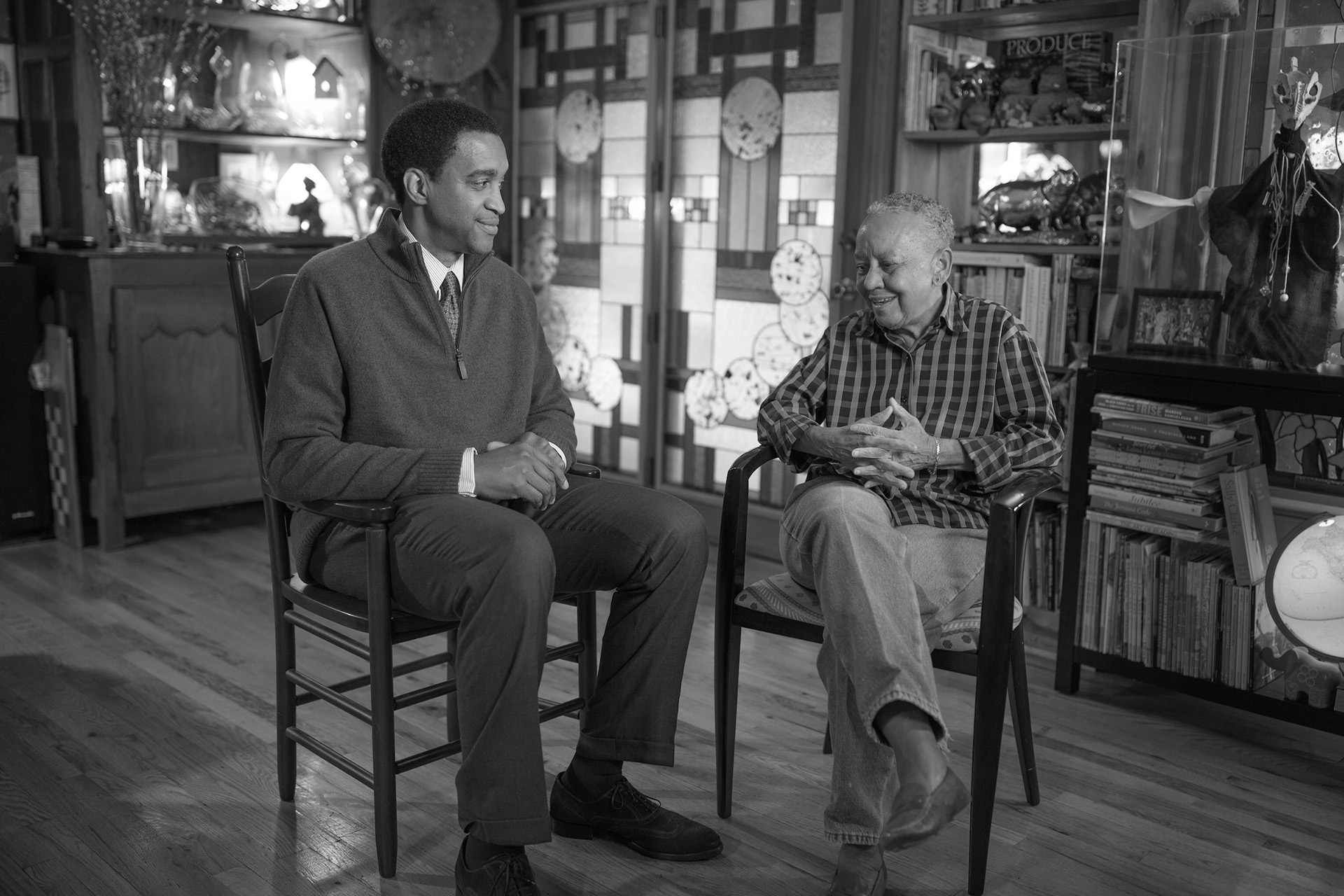 Nina Simone’s Night Song is one of her most beautiful recordings. Arranged for orchestra by Hal Mooney, it was composed by Broadway’s Charles Strouse, best known for writing the hit show Bye Bye Birdie. Night Song came out of his Golden Boy, which famously starred Sammy Davis Jr. In her version Simone sounds cheerfully meditative in front of the sweeping strings as she sings of a summer night in which “everyone has someone and a place to go.” Everyone else, that is. In Nina Simone’s version, the singer becomes overtly emotional in the bridge. She asks tremulously, “Where do you go, when you feel like your brain is on fire?” There is no clear answer. (Night Song can be found on Simone’s Four Women: The Nina Simone Philips Recordings, Verve.) What brings the song to mind is a recent performance of Strouse’s song by tenor saxophonist Javon Jackson. I heard him with his quartet consisting of pianist Jeremy Manasia, drummer McClenty Hunter, and the veteran bassist David Williams, who, as Jackson teased, has recorded with everyone—including Liberace. More germane to the jazz world, Williams also appears on records by Elvin Jones, Art Pepper, Duke Jordan, Herbie Hancock, Dexter Gordon, and Herb Alpert. (If you want to hear how a bass can float a band, try Abdullah Ibrahim’s Water from an Ancient Well with David Williams: it’s one of the most beautiful, gently uplifting recordings I know. Water from an Ancient Well is on Enja.)
The quartet was at Sculler’s in Cambridge, and the highlight of their set was a longish, almost vocalized solo by Jackson on Night Song. It was all loneliness and heartbreak as Jackson focused on the written melody, which he was able to write and rewrite in his fluid, clear-toned improvisations. Many of us first knew Javon Jackson as the tenor saxophonist with the mid-to-late 1980s version of Art Blakey’s Jazz Messengers. At Sculler’s he told us Art Blakey was his best man, but that an hour before the wedding ceremony was to take place, Blakey wanted the groom to take him to buy a tuxedo, which he had forgotten. Jackson disappointed his boss by refusing. He had another clothing story: He had just been visiting with the 78-year-old poet Nikki Giovanni, and realized when he was driving to Boston and was four hours away from Giovanni’s place that he had left his clothes behind. She sent them to him in some expedited manner. Jackson told me he talks to Sonny Rollins every week and that when Jackson’s father died, Sonny graced him with a 10-minute prayer over the phone. But he doesn’t sound like the more raucous Rollins. Perhaps there’s some Stanley Turrentine in there: Javon has recorded Turrentine’s hit Sugar. (It’s on guitarist Dave Stryker’s Messin’ With Mr. T.)

Jackson’s tour was meant to celebrate the release of his quartet’s new disc, The Gospel According to Nikki Giovanni (Solid Jackson Records). Giovanni is evidently an old friend, so Jackson asked the poet to recommend spirituals that are particularly meaningful to her for him to arrange and record. Giovanni tells us: “The spirituals comforted people through times of slavery…. They are so important, but a lot of students today do not know a whole lot about the history of these songs. And they should. So I’m out here putting water on the flowers. They need a drink.” Like Mary Lou Williams, Giovanni thinks of music as spiritual and spirituals as healing and empowering. In her poetry and in her life, she manages to find and describe joy in times of suffering and stress, as readers might remember. She found herself, it would seem, content because she was loved. In Nikki Rosa she writes that “Black love is Black wealth” and laments that people will “Probably talk about my hard childhood / And never understand / All the while I was quite happy.”

For Javon Jackson’s project, Giovanni came up with nine spirituals and added in Night Song, which she, though not a professional musician, sings on the recording. Their Night Song begins with a sweetly soft-spoken introduction by pianist Manasia. Jackson enters and plays the melody almost straight, with a minimal vibrato. It couldn’t be lovelier: It’s as if he were hearing Simone while he was playing, except that he doesn’t add any special fervor during the bridge. Beautiful though the recording is, I have to report that the live performance, without a vocal, was even more enthralling. All the spirituals here are familiar. Wade in the Water was a hit for Ramsey Lewis when I was in college, but by that time I had already heard the Staple Singers sing it live, and the Golden Gate Quartet on record. Javon Jackson’s recording including a reading of a Nikki Giovanni poem, which includes the lines: “I want to write an image / like a log cabin quilt pattern / and stretch it across all the lonely people who just don’t fit in / We might make a world if I do that.” Making a world while feeling like a motherless child is what the spiritual was all about. Jackson plays the melody of Swing Low, Sweet Chariot all by himself, before the band enters and plays it as the cheerful upbeat number the lyrics suggest. In his solo, Jackson quotes Sonny Rollins’s St. Thomas, an indirect tribute. 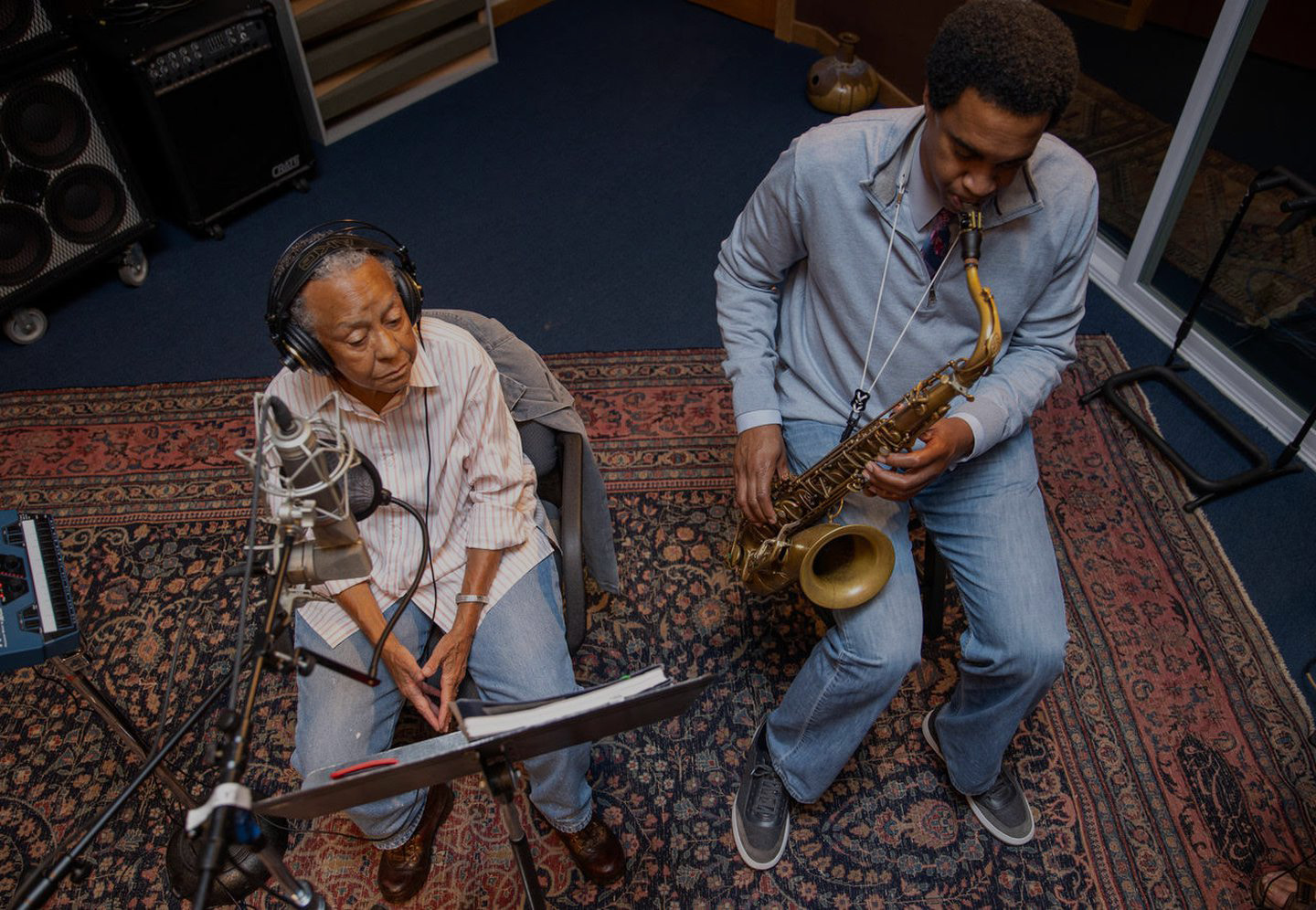 “Poetry in motion” with Javon Jackson and Nikki Giovanni says the Boston Globe. 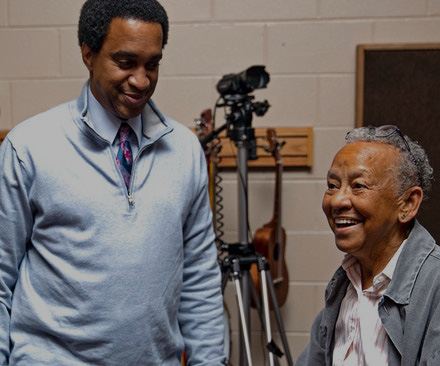 The Brooklyn Rail reviews “Wade in the Water” single from “The Gospel According to Nikke Giovanni”.